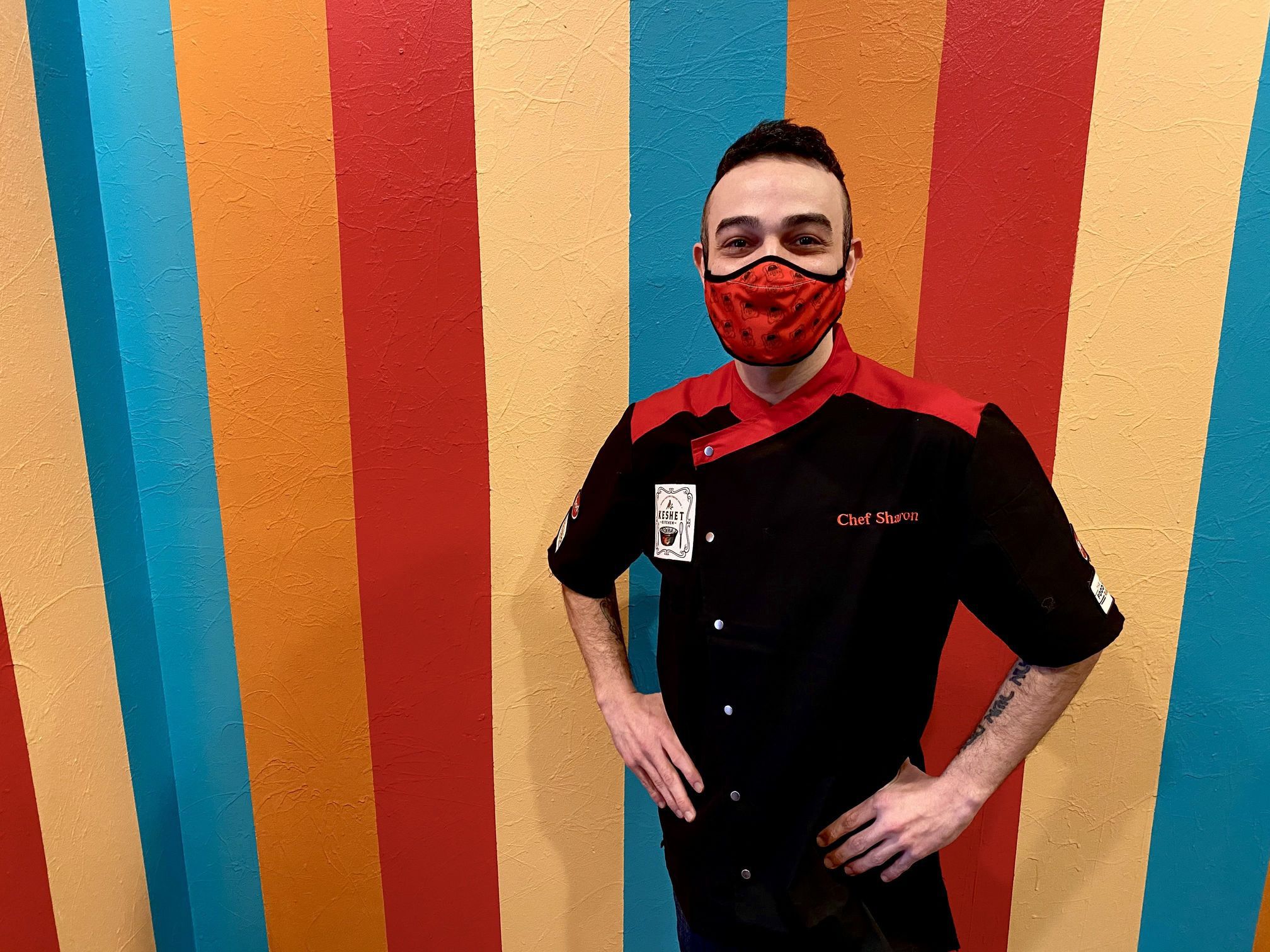 (215) 720-1597
Facebook Instagram Globe Icomoon-the7-font-the7-mail-01
Chef Sharon Shvarzman and his partner Abraham Bloom anticipated working long hours, especially during the opening weeks of their new Queen Village takeout restaurant, Keshet Kitchen.
What got you into cooking in the first place?

Well, I come from a long line of culinarians in my family. My grandfather was a Masterchef. On my dad’s side, my grandmother was a master baker and their parents were farmers. The food business was somehow inevitable in my life.

What inspired your menu?
Being Israeli born but Brooklyn raised never allowed me to enjoy and grow up with real Israeli food. So, my parents and grandparents really only ever cooked with middle eastern and eastern European spices. As kids, my siblings and I were very picky eaters. We loved American food. SO eventually my parents and grandparents decided to make those foods using the spices that were indigenous to their homeland. It was the only way to get us to eat. Keshet’s menu is literally the foods we grew up eating as kids. That was the only way my family could show us Israel from a culinary point of view. Of course, they would make authentic dishes but I was more interested in Mac N’ Cheese and Fried Chicken.
You were on ‘Worst Cooks in America’, Should we be worried?
Well, let me say this. everyone gets cast for different reasons. I don’t know what mine was, but I knew I had a goal set in mind if I got on the show and that was to learn as much as I could from 2 brilliant chefs. because growing up I never wanted to have anything to do with the culinary industry because my family was in it for 50+ years. So I didn’t think of myself as much of a cook. I never really made anything harder than a boxed mac n cheese or instant mashed potatoes. But, I do remember doctoring them up a little. I don’t think that really made me a “worst cook” but it definitely made me a lazy and messy one, So when I got on the show, I realized I wasn’t as bad as I thought I was. At some points, I actually thought I didn’t belong there. Yes, I did start lots of fires in my day, I’ve made a lot of cleaning ladies quit just because of the messes I would leave in the kitchen. I’ve probably had half a dozen small pieces of equipment explode on me, but that’s part of the learning process right? Oh and let’s not forget, I did win Food Networks The Great Food Truck Race the following year.
What drove you to come from Philadelphia from New York?
I’ve visited Philadelphia many times in the past 15 years (because that is the only place I could get a good cheesesteak). Also, Abraham, my better half, was planning on attending PT school in Philadelphia. But, that went on hold because of Covid.  So, we just decided to move out here early and meet friends. Unfortunately, that’s been really hard to do with the pandemic, although we did meet some awesome neighbors. We decided to open Keshet Kitchen so we can meet friends and create our own little family within our community.
You work at Keshet Kitchen alongside your husband…Does that cause any stress?
Stress? Alongside? Abe takes care of the front of the house and I take care of the back ;). Plus, who doesn’t like an alignment and a backrub during shifts? Also, we can get each other off early.
What can we expect at Keshet Kitchen?
Well, Keshet Kitchen will take you on a tour of my life being an Israeli growing up in America. These are the dishes that I grew up eating as a child. A lot of the recipes were my grandfather’s recipes. Of course, I put a little of myself into it. but, these are the dishes that would always put a smile on my face.
Plus, we are super excited about the cookbook coming out next year. It will feature all the recipes Keshet has to offer some great behind-the-scenes of worst cooks and the great food truck race and so much more. 😉 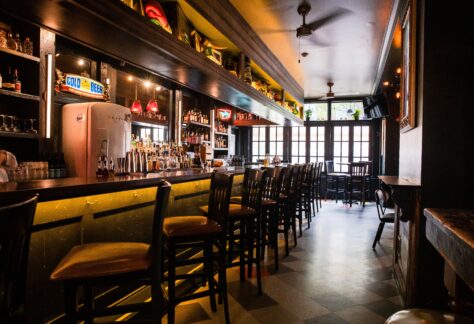 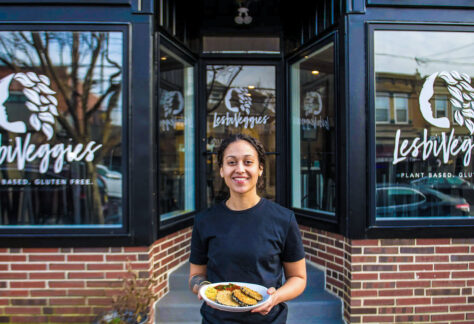 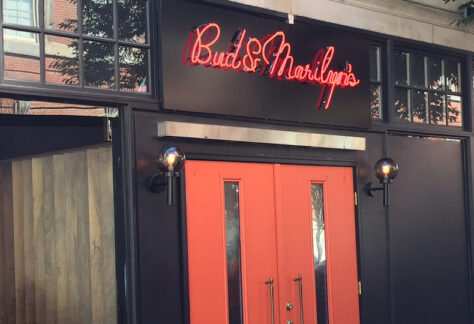 Are your tastebuds ready for the next big thing in Philly? Marcie Turney and Valerie Safran (Barbuzzo, Jamonera, Lolita, Little Nonna’s) have ventured into the heartland of Wisconsin (Turney’s hometown) for inspiration for their retro-American restaurant, Bud & Marilyn’s. 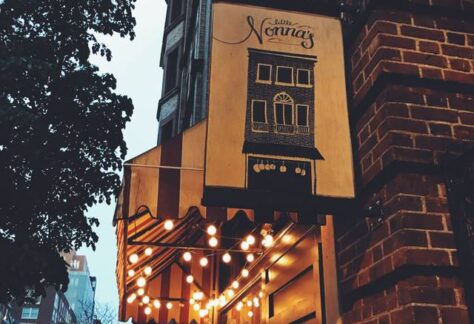 A Gayborhood Restaurant That Feels Like Family: Little Nonna’s

When you’re at Little Nonna’s, the newest restaurant by 13th Street entrepreneurs Marcie Turney and Valerie Safran located in the heart of the Gayborhood, you’ll feel like you are in good hands. 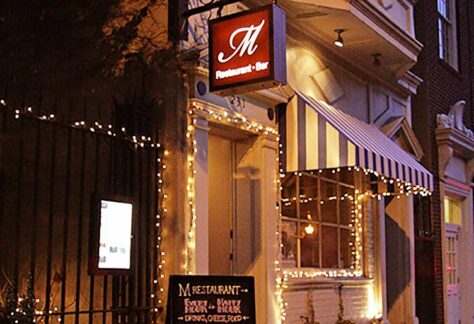 The time has come for Philly’s restaurant week to show newbies, cheap people, fun adventurous people, and out-of-towners what they’ve been missing at amazing restaurants. M Restaurant is where I went for restaurant week, and there is still time for you to make a Rez. 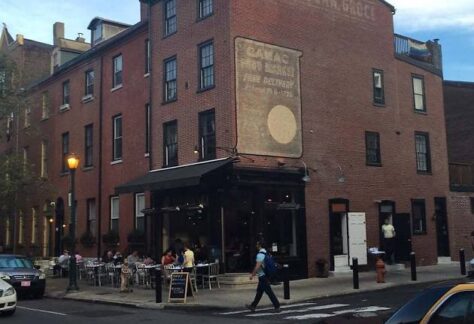 Short Rib Ragu That Will Change Your Life: A Review of Mercato

There’s a 400 sq ft restaurant on the corner of Camac and Locust that will change your life. I love this fact because the prior tenant of this tiny little corner space was another life changing phenomenon. 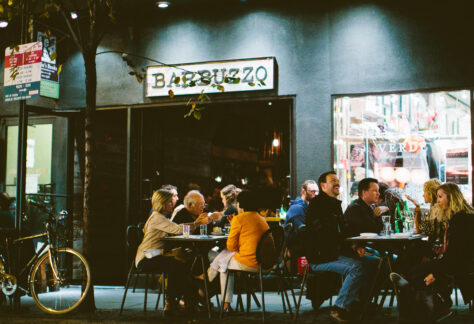 Grammy Mame, Stylez Milez, and I had the chance to try Barbuzzo during restaurant week.

The power lesbians of 13th Street (Valerie and Marcie) who also own Lolita, Grocery, Bindi, Open House, Verde, and Marcie Blaine Chocolates debuted their latest home run – BARBUZZO! Honestly, these women have the Midas touch! One might be tempted to call them overachievers. Personally, I think they passed that when they opened their 4th business on 13th Street! I think after a 7th business we need to admit, they’re on a quest to rule the world, or at the very least the gayborhood!