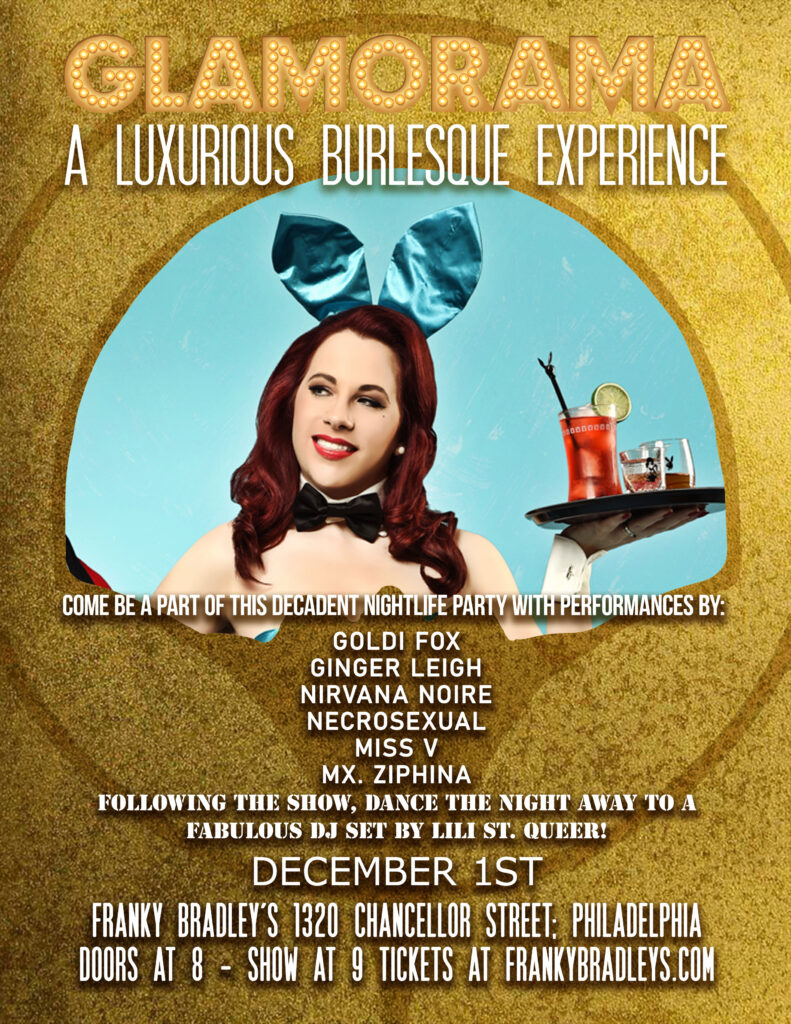 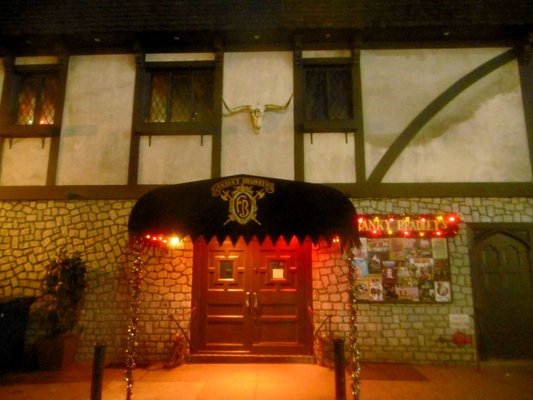 Glamorama is a luxurious burlesque experience!  Step into our decadent parties and enjoy an immersive experience of interesting nightlife characters, curated projections, themed cocktails, and live performances from some of the top burlesque, drag, and cabaret artists working today!  Dress to impress and be a part of the experience yourself!

For our December 1, 2022, experience, enjoy live performances by:

Goldi Fox –  Goldi Fox graduated from The Coronado School for the Performing Arts in 2007 & graduated with honors with a BFA in modern dance education at The University Of The Arts in 2011. She studied dance in Paris in 2010 & after graduation, she attended post graduate school at The Headlong Performance Institute via Bryn Mawr College, studying devised physical theatre.

Fox has been a choreographer & performer in Philadelphia’s Premiere Neo-Burlesque Troupe, The Peek-A-Boo Revue since 2012 & toured w/ them in Germany in 2017. She’s performed in many national & international festivals & shows, as a featured & headlining award winning performer. She’s performed in the Burlesque Hall Of Fame 4 times & is a BHoF title holder, for Best Troupe in 2012.

She has danced for Gunnar Montana Productions since 2013 as a resident company member. Her favorite shows include performing in GMP’s NYC “Off Off Broadway” show Kink Haus at La MaMa Experimental Theatre Club in 2018 & the reintroduction of Basement in 2019; which also premiered on Broadway On Demand in 2020.

She took home The 3rd Place World International Crown in The World Burlesque Games in 2018 & was a headliner in Celeste Giuliano’s Creep Show Peep Show in 2019. She’s been a member of Lehigh Valley’s Premiere Burlesque Troupe, The Looking Glass Revue since 2021 & is a regular featured burlesque performer in Lelu Lenore Presents.

Goldi & her dance partner FAGL ROQ are known as the award winning Gold N’FAG; The Best Dirty Dancing // Choreographing Duo in Philly. In 2022 they glittered the Burlesque Hall Of Fame Orleans stage in the Movers, Shakers, & Innovators Showcase.

Currently, you can find her performing as a resident artist at Fabrika Philly & mentoring private lessons at the Philadelphia Burlesque Academy.

Ginger Leigh  – Ginger Leigh made her way to burlesque in 2006 with The Peek-A-Boo Revue and her life was changed forever. In addition to performing with and choreographing for The Boo, she has served as the Assistant Director for many years. Ginger is a co-producer of Launchpad Burlesque alongside Dottie Riot and a proud member of The Roddenberries. Ginger founded the Philadelphia Burlesque Academy in 2013 (originally known as the Peek-A-Boo Dance Clinic) and has loved every minute of it. Holding a BA in Dance Studies from the University of South Florida, she loves combining her classical training with the art of the striptease, while smashing the idea that only select bodies are meant to dance and be seen.

Some of the highlights from Ginger’s burlesque career are Peek-A-Boo Revue’s headlining show in the 2017 Munich Burlesque Festival, multiple performances in Berlin, Peek-A-Boo’s title of Best Troupe at the Burlesque Hall of Fame in 2008 and 2012, and group performances in the New York, Vancouver, Colorado, and Philadelphia Burlesque Festivals. She had the honor of teaching workshops while in Munich and Berlin. Ginger’s calling is to entertain the masses and help her students live their burlesque dreams while feeling fucking amazing!

When she’s not being burlesquey, you can find Ginger Leigh surrounded by plants, playing with her dogs (Roxie and Tang0), being a true crime nerd, and teaching strength and cycling classes at BPM Fitness!

Nirvana Noire – Nirvana Noire is the Video Vixen of burlesque! Hailing from Philly, she made her debut virtually through the Philadelphia Burlesque Academy. She has since burst onto the Philly scene performing burlesque and go go in venues such as The Fillmore. Through the art of striptease, her acts celebrate Black music and icons that inspire her. She is the first burlesquer to win the title of Black Girl Magic Philadelphia. In addition to captivating audiences, Nirvana is “Philly’s kitten with sharpest claws” as resident stage manager for some of Philadelphia’s hottest shows, including nightlife performance competition show, Snatcherella 3000. She is also a member of Raspberry Royale, Philly’s first all Black, brown & queer burlesque troupe.

Necrosexual – The Necrosexual is the most electrifying man in corpse entertainment. He performs a wild hybrid of heavy metal comedy, live music, and burlesque. The Necrosexual describes his personality as “The Joan Rivers Of Black Metal,” a moniker earned from interviewing the biggest names in the metal world on his Youtube channel for a decade. As a host, the Necrosexual has emceed events ranging from dive bars to graveyards, the Satanic Panic Burlesque Festival in Chicago, and countless shows at Franky Bradley’s, beginning with their opening night show in 2015.  Prepare to go one on one with the GRIM-1 for a Necrosexual Encounter you will never forget.

Miss V – The producer of Glamorama and a member of the Lehigh Valley’s premier burlesque troop, The Looking Glass Revue!  Known for her extravagant costumes, she believes is an opportunity to create an intimate but fleeting fancy which she shares with the audience.

Mx. Ziphina – Mx. Ziphina was born and raised in Philadelphia, aiming to create space for their black sexual liberation and their non-binary identity. They are making their Glamorama debut in December!

Doors at 8, show at 9 at Franky Bradley’s, 1320 Chancellor Street; Philadelphia