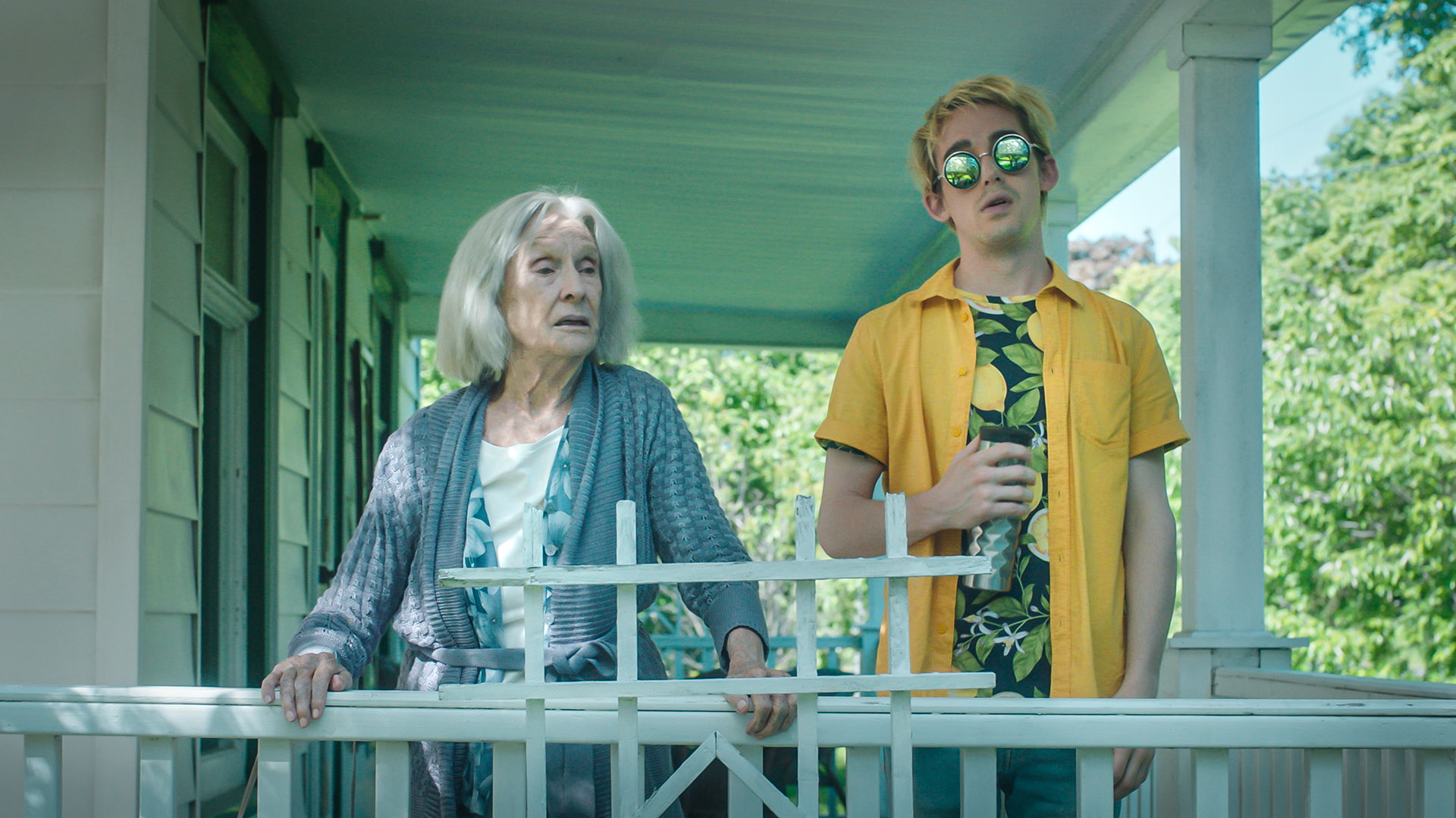 We see a nightclub called Peckers filled with men and women watching a rather astonishing drag act featuring all sorts of dance moves. We then see a rather sad queen backstage, drunk, who stumbles out into the night. Next, we see a winsome blond packing his bags in his bedroom. Both are Russell. It seems that his middle-class partner wants him to continue his acting, not doing drag. Russell leaves with no money, but several suitcases. He is on his way to grandma’s house, in Prince Edward County, which for some reason, he perceives as a safe haven. He is unable to pay the $79 taxi fare, so he gives the driver a bottle of scotch.

If we were Canadian, we would realize that this would be our equivalent of Bucks County, PA, an artists’ colony.

As it is, this could be just about anywhere until we actually see paper money towards the end of the film, and the Ontario license plate on the Jaguar Margaret, his grandmother, has saved for him.

Episodic in nature we first think Margaret has blown herself up at the stove; luckily, she hasn’t. We see drag shows, drag musical numbers, and poignant views of how just about every human connection depicted here is faulty. We learn that Russell’s grandfather committed suicide. We learn that Margaret was once a high-powered executive who often rubbed her bridge partners the wrong way. We see that Russell almost commits suicide, and on and on. The role of Margaret is beautifully portrayed by the late film actress Cloris Leachman who died earlier this year aged 94.

What is the point of this merciless examination of our failure to connect, yet that need to connect that is so strong. Jump, Darling is not a film for sissies. By the end of the film, we have been taught that we ourselves are the ones responsible for our happiness, no one else. Russell has a partner who finds his drag career professionally embarrassing. Russell flirts with a worker at the gay bar who treats him coldly and brutally. Russell’s mother tries her best to be the parent to both her mother and her son. Russell is under pressure to study acting and do the right thing as others see it. Russell’s grandfather is seen as weak and a failed artist who took the coward’s way out by suicide. As Margaret said to Russell, his grandfather had to jump from a hotel balcony in the city, making a mess for some poor immigrant to clean up.

Jump, Darling does have an epiphany for Russell, Margaret, and Russell’s mother. By the end of the film, they have decided what their true paths should be, and appear to be on their way to living what Jack Kerouac said, “Why not live for fun and joy and love?”

Jump, Darling is an important film which just about everyone from 18 to 81 should see.

The qFlix Film Festival will run all this week at the Suzanne Roberts Theatre and virtually, too. For tickets, programming, and information, visit www.qFlixphilly.com