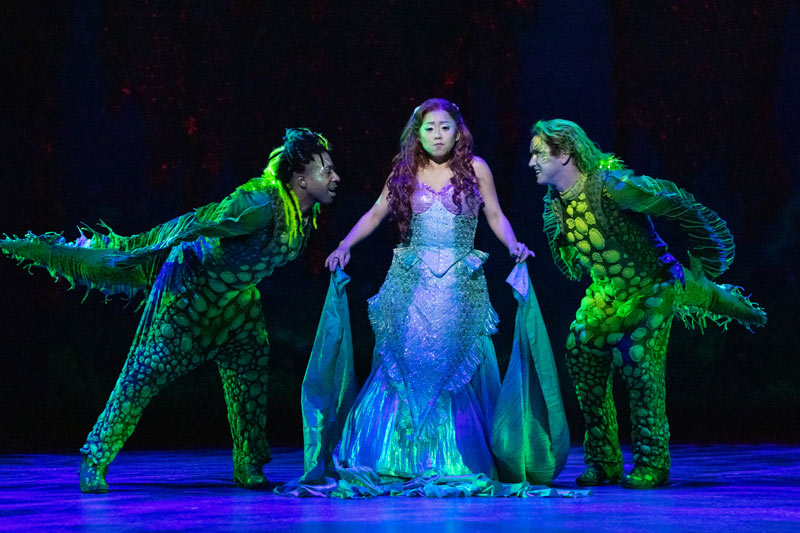 Although retired since 2014, I still relish opportunities to teach, write, and share opinions.
Now through January 2nd, Disney’s The Little Mermaid will be at Philadelphia’s Walnut Street Theatre.
Based upon the rather scary fairy tale by Hans Christian Andersen, it has been sweetened considerably by the Disney creatives into their 1989 animated musical. It later found new audiences as a 2008 Broadway musical, which we still see today.
Disney’s The Little Mermaid has music by Alan Menken, Lyrics by Howard Ashman and Glenn Slater, and Book by Doug Wright. As usual, the Walnut Street Theatre has lavished effort into creating a spectacle, with fine actors, costumes, sets, and a live orchestra in the pit.
The actors are excellent. From Diana Huey as an accomplished Ariel, to Dana Orange as a superb Sebastian, to Ben Dibbles’ hilarious Chef Louis, the cast shines. No less fine are Sean Thompson as Prince Eric, Rebecca Robbins as Ursula, and Adam Hoyak and Jesse Jones as Flotsam and Jetsam. Kudos to the Dance Captain, Adam Mandala, doing a fantastic job. Chris Burcheri directed the music and vocals with both care and panache.
Highlights which stand out in the memory are many. The musical number, “Under the Sea” was spectacular, as was Chef Louis cavorting and the ensuing mayhem with cooks flying and disappearing under the table as they fought Sebastian.
Pandemic restrictions are outlined in detail on the Walnut Street Theatre’s website, www.walnutstreettheatre.org .
Small children possibly younger than five years old were seen in abundance on opening night, many of them chattering away during the performance with their parents or guardians. After about 30 minutes into the 7pm show, they appeared to stop, perhaps being so near to 8pm, it was way past their bedtime. As a family entertainment, there are a few special discounted performances for families, with many matinees. These performances are indicated on the website. There are also a limited number of $10 tickets available.
Disney’s The Little Mermaid is a great holiday spectacle that will leave you cheering and walking on air.
For further information, call 215-574-3550, 800-982-2787, or visit www.walnutstreettheatre.org
Next onstage will be Noel Coward’s Blithe Spirit, January 11 – February 13.
Little Mermaid Tickets