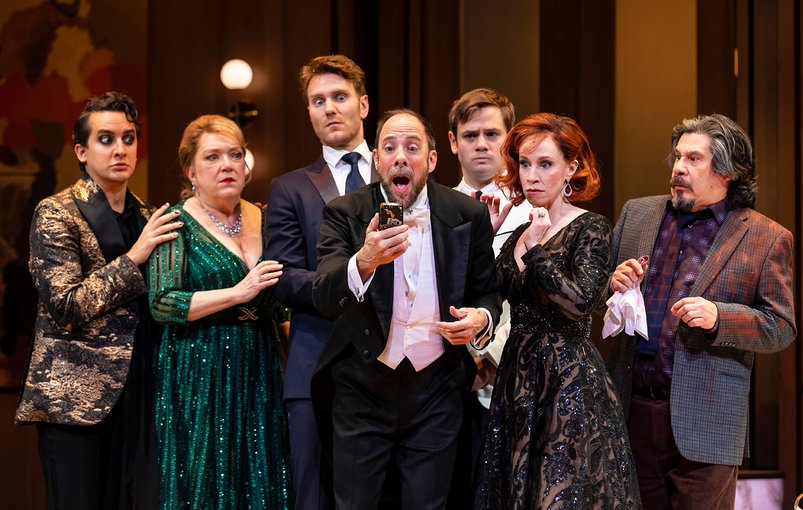 Although retired since 2014, I still relish opportunities to teach, write, and share opinions.
Terrence McNally’s last work It’s Only a Play has been given a great new production at George Street Playhouse in New Brunswick. The only thing you need to be careful about is that this fun romp is only playing until December 19, so hurry and see it.
It’s Only a Play is at the new, intimate Elizabeth Ross Johnson Theater. The audience enjoys perfect sightlines from everywhere, and the seats are large and comfortable. Covid-19 guidelines are in effect, so there is room to socially distance. Wearing masks and having the proper document to enter is also mandatory.
The late, great Terrence McNally died last year from Covid-19 at age 81. His astonishing career spanned Broadway hits (both plays and musicals), to television, film, screenplays, librettos, and Tony Awards. He is especially known for his truthful, poignant depictions of gay life. He is survived by his husband Tom Kirdahy.
The plot centers around opening night of a play, with the set being a room in the Manhattan townhouse of its producer who is throwing a party. Some of the guests are old friends, some are frenemies, and a fresh-faced aspiring youth.
All of the actors are cast from strength. Each actor has an adequate opportunity to speak and interact in the play. Doug Harris is Gus P. Head, factotum and star-struck aspiring young actor. Mr. Harris races about bringing coats into the room from guests arriving downstairs, as well as providing comic relief. You may also find that Mr. Harris wears his jeans extraordinarily well. So well, in fact, that you might find your attention wandering as you study his strong loins. Mark Junek is James Wicker, a famous actor who has enjoyed starring in a long-running television series, and who happens to be best friends with the playwright Peter Austin, played with great humanity by Patrick Richwood. The Producer and hostess is the enigmatic and kind Julia Budder played by Lindsay Nicole Chambers. For comic relief, we have two eccentric characters played expertly by Greg Cuellar and Triney Sandoval. Mr. Cuellar is Sir Frank Finger, a director who the critics say can do no wrong. Sir Frank is prone to gay drama and kleptomania. Mr. Sandoval is Ira Drew, a reviewer known for his scathing comments in print. Mr. Sandoval explodes onto the stage with arguably the loudest voice in the cast, with outsized histrionics to match. The character who has the best punchlines by far is Virginia Noyes, here hilariously played by Kristine Nielsen. Her comic timing is impeccable.
Forget the Delta Variant, the Omicron Plague, The Supreme Court and Washington in general. Come see this final play by a great master of comedy while you can in a wonderful production at the George Street Playhouse.
Terrence McNally’s It’s Only a Play is at the George Street Playhouse in New Brunswick, NJ. For ticket information visit www.GeorgeStreetPlayhous.org .

Her Portmanteau is next on stage from January 18-Feb. 13. 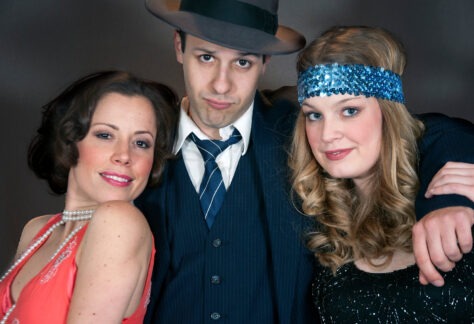