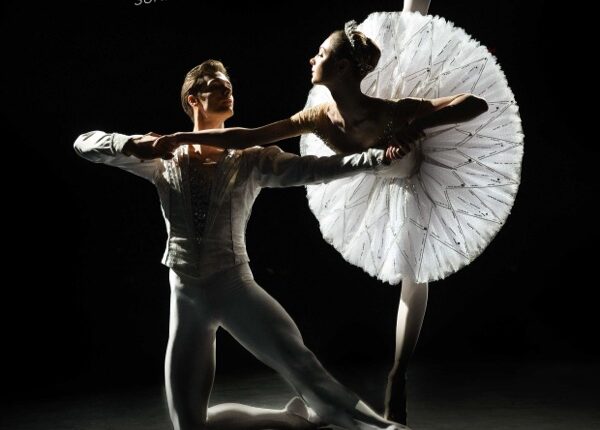 Although retired since 2014, I still relish opportunities to teach, write, and share opinions.
On January 23, Cinemark presented George Balanchine’s classic ballet Jewels danced by the Bolshoi Ballet live in movie theatres.
Every few months, The Bolshoi presents another masterpiece from their repertoire. This time, it was Jewels. The Cinemark website describes Jewels as a glamorous triptych which is an homage to the cities and dance schools of three countries and the cities of Paris, New York, and St. Petersburg. Using a jewel for each city, emeralds, rubies, and diamonds, Balanchine created his masterpiece using music by Faure, Stravinsky, and Tchaikovsky.
Among the famed New York City Ballet interpreters were such legends as Suzanne Farrell, Patricia McBride, Edward Villella, and Peter Martins. In this Bolshoi production, we had a rising star, not more than a teenager, in Patricia McBride’s role in Rubies. In Diamonds, we luxuriated in the star power of ballet goddess Svetlana Zakharova partnered by the beautiful and talented Jacopo Tissi. More on him later.
One can quibble over paying $20 for the privilege of seeing this live, but the only alternative is to fly to Russia, which these days isn’t a good idea with an international war about to begin with Russia attacking Ukraine. The Bolshoi bathed us with unalloyed splendor of dance. As a life-affirming experience, it was priceless. The movie theatre was new, spacious, and had the loveliest plush reclining seats one could easily dance in. One need not have worried about distracting others in the audience since there were about eight of us in the entire theatre, with no one under age 50. One might say most were over age 70.
Complaints were minor. For example, the two 25 minute intermissions were long, but ameliorated by interviews hosted by the trilingual goddess Katerina Novikova. Possessed of great style, as well as chic fashion sense, Novikova translated with aplomb. Even when the Director of the Bolshoi talked over her translations, she remained cool and professional when he acted like an ass. She also wore jewels germaine to the ballets, such as a diamond and ruby rose pin for Rubies, and a stunning diamond necklace for Diamonds. Dear Bolshoi: have some professional photos done for Ms. Novikova! She is a great beauty and a smart gal. Those on Google look terrible.
Ah, Jacopo Tissi! Created just this month as a star of the Bolshoi, he achieved world domination in Diamonds. Formerly a star with the Ballet of La Scala, he was invited to be a member of the Bolshoi. A great honor, and he accepted. Tall as a gladiola, strong as the Golden Gate Bridge, he is suave and sensuous as the Adriatic. Mr. Tissi is eminently swoon worthy. An Important fact: his birthday is February 13, 1995, So he will soon celebrate his new birthday. Why must beauty be so painful?
The Bolshoi Ballet will next offer Swan Lake in early March, followed by The Pharaoh’s Daughter all live from Moscow. Visit www.BolshoiBalletinCinema.com