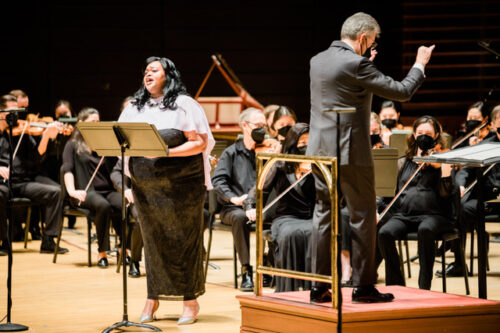 Although retired since 2014, I still relish opportunities to teach, write, and share opinions.
On January 21 and 23, Opera Philadelphia presented a double bill in Verizon Hall, Oedipus Rex by Igor Stravinsky and Lilacs by George Walker.
Walt Whitman’s poem When Lilacs Last in the Dooryard Bloom’d has been set to music for soprano soloist and orchestra by George Walker. The poem written in 1865 commemorated Lincoln’s assasination that spring, on April 14, when lilacs bloom in the northeast United States. For Whitman, lilacs blooming would be a perpetual reminder of the President’s assassination.
Corrado Rovaris conducted soprano soloist Tiffany Townsend and orchestra in the relatively short piece.
Walker was a noted musician, educator, and composer who won the Pulitzer Prize. He died in 2018 at age 96.
Lilacs, as the drama is called, had a lush and varied orchestration with difficult swings in volume and tempo for the soloist which posed no problem for the esteemed young Ms. Townsend. The piece was performed in English.
A photo of lilacs is provided because when I taught Literature as an adjunct, we studied short stories with chrysanthemums and geraniums as plot drivers. Many students complained that they had no idea what those things were, since they did not grow up on a farm. We did some internet research and that problem was solved. With this in mind from a few years ago, an image of lilacs could be helpful.
After the intermission, Igor Stravinsky’s masterpiece Oedipus Rex took the stage. Written for large orchestra, male chorus, and soloists. Stravinsky wrote Oedipus Rex in 1927, years after such masterpieces as The Firebird (1910) and The Rite of Spring (1913). Based upon the Greek classic tragedy of Oedipus the King, it boasts a Libretto by the legendary Jean Cocteau. While not being unknown, it is rarely performed. It is performed in Latin. The Metropolitan Opera produced it with Anthony Dowell as Narrator and Jessye Norman as Jocasta, while the Boston Symphony was to produce it in New York in Carnegie Hall, but had to cancel due to terrorist bomb threats against Narrator Vanessa Redgrave for her pro-Palestinian stand.
Philadelphia is gifted with a fine production which remains available on the Opera’s livestream channel until February 20. The Opera Philadelphia Channel is at www.operaphila.tv and select devices.
The fine cast of Oedipus Rex featured William Burden as Oedipus the King, Rehanna Thelwell as a remarkable Jocasta, Mark S. Doss as both Creon and the Messenger, Charlotte Blake Alston as the Narrator, Jonathan Lemalu as Tiresias, and Ethan Burck, a current student at Curtis Institute of Music who stepped in at the last minute. Mr. Burck performed admirably. Mr. Burck was the 2021 tenor apprentice at Santa Fe Opera.
A touching speech was made before the performance by David B. Devan who thanked the orchestra, soloists and crew for bravely rehearsing and performing for a live audience during the pandemic. He said it was over 700 days since the orchestra last performed for a live audience. And for this we are very grateful.
Next Opera Philadelphia performance will be Rigoletto April 29-May 8 at the Academy of Music. For more information and for tickets, visit www.operaphila.org or 215-732-8400.