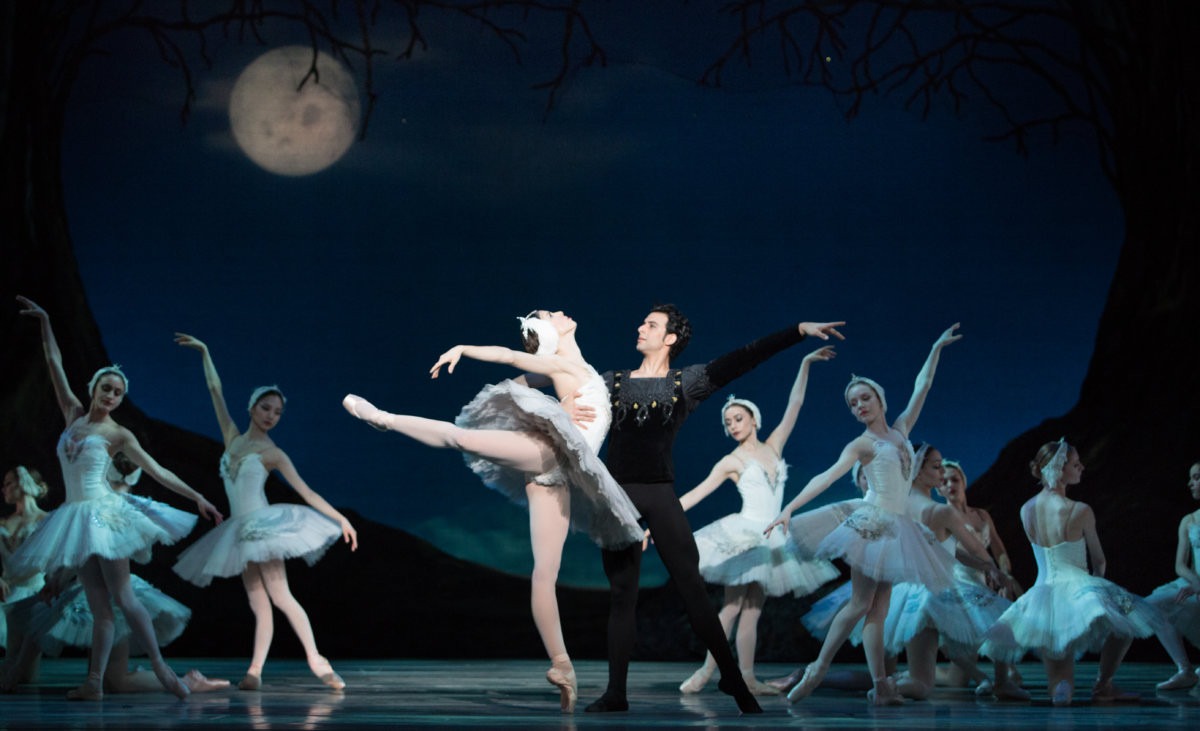 Although retired since 2014, I still relish opportunities to teach, write, and share opinions.
Philadelphia Ballet presents Swan Lake at the Philadelphia Academy of Music until March 13.
The major news here is that the former Pennsylvania Ballet is now Philadelphia Ballet. More good news is that the dancing on Opening Night was phenomenal. It is hard to imagine that the brilliant Arian Molina Soca and the luminous Dayesi Torriente could be dancing better than in The Before Time, two years ago, but from all evidence, they were on fire in this Swan Lake. Von Rothbart was danced by Principal Dancer Sterling Baca, who the audience failed to recognize, shrouded as he was by the Sorcerer Owl costume.  Only his lovely face peeked out. Of the three principals, only he did not elicit applause upon his entrance. Audiences who applaud leading dancers indicate that these dancers have arrived, and make no mistake, both Mr. Molina Soca and Ms. Torriente have definitely joined the Pantheon of great dancers this night.
In addition to casting Mr. Baca as the crazy owl witch who casts magic spells upon virgins dooming them to his swan seraglio, Ashton Roxander as the Prince’s friend, and both Peter Weil and Nicholas Patterson as hunky, spunky Neapolitans were also luxuriously cast.
The plot, as most of you know, is rather shaky. Prince Siegfried is tricked into swearing his love to the ominous bad girl Odile, an evil twin to the angelic Odette whom he loves. How does this count, o heavens! But in swan lore, it does.
It is hard for us to believe today that the first performance of Swan Lake flopped. Experts remain puzzled as to why. One could blame the sexy Odile, as bad, bad girl, seducing the Prince to her can-can. Or the curious business of handing Prince Siegfried a weapon to kill and ordering him to marry, all on his turning 21. Men who turn 21 can now kill things and have sex, too.
These eyes once spied a production where Von Rothbart wore a domino. At the telling moment of trickery of Siegfried, he tore off his domino to reveal his identity to the Queen, who fainted in shock. Did he seduce the Queen one night, flying into her room as a six-foot-four owl? Is Prince Siegfried brother to Princess Odette? The best explanation for their double suicide. OoPs! Spoiler alert. Here, in this production, no such clouds of seduction and incest fogged this spendid evening.
In addition to the marvelous dancing by the principals, mention must be made of the superlative work by the Corps de Ballet. Wow, just wow, you will be forced to say upon seeing them. Kudos to the young ladies, and to Charles Askegard, Rehearsal Director, and his expert staff.
Casting information can be found via a link online when purchasing tickets. March 10 will have the same cast.
Absolutely do not miss this great work of art by Tchaikovsky and Philadelphia Ballet.
Swan Lake will continue at Philadelphia’s Academy of Music until March 13. Soon afterwards, from March 17-20, a full-evening celebration of George Balanchine.
For tickets and information, visit
https://philadelphiaballet.org/2021-2022-season/