"It was just Valentine’s Day, which is supposed to be the most romantical of days, right? Then why did my brother just get dumped by his live-in girlfriend and why have two of my coworkers just broken up with their boyfriends in the last week? I noticed the coincidence, but thought nothing of it until I remember you posted this about how Valentine’s Day is a big time for breakups. What gives, yo?"

Good eye, mate. While VDay is not the date with the highest incidence of breakups throughout the year, it certainly is when the Spring Fling-Your-Partner-Like-a-Booger trend really takes off. It’s the starting pistol for a tidal wave of relationship changes that continue on through the Spring months, as you can see on this lovely chart which tracks when Facebook break ups are most common: 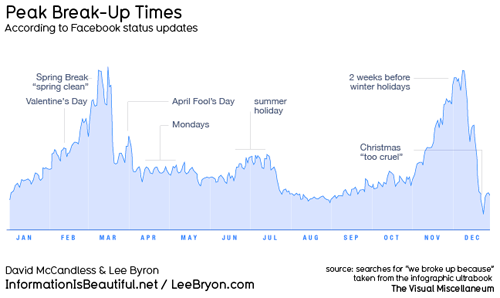 What accounts for this trend? Why would so many people have so much drama right around the time of year when the entire force of the marketing power of the US Economy is selling messages that if you truly love your woman, you will give her something that required an African child to lose a minimum of an arm to acquire? I mean, that’s not putting any pressure on anyone.

Besides this ridiculous stress to lavishly express one’s adoration via expensive objects or complex planning, which some people take as a sign that perhaps s/he really isn’t worth all this trouble after all, there’s the flipside: disappointment.  I’ve also read that two of the times when women are most likely to file for divorce are right after Valentine’s Day and Mother’s Day. These women may have been plugging through an unfulfilling marriage, feeling taken for granted and hoping that on that one special day, they’d be showered with love…. only to find some serious disillusionment.

But aside from these very gender stereotyping explanations, there’s the fact that VDay is, for many people in the Northern Hemisphere anyway, smack in the midst of Seasonal Affective Disorder’s version of Shark Week, as suicides are actually most common in this early part of the spring. If you are prone to the winter doldrums, February is probably your emotional nadir.

Think about mid February: It’s been cold and wintry for so long, you can barely remember a day when you didn’t have to wear three shirts, a coat and an Elmo hat just to walk to the mailbox. And it takes twice as long to get anywhere, so you stop going out or seeing your friends as often and end up doing libido-killing things like watching the entire season of a TV show on DVD in a single sitting, and it’s dark when you go to work and dark when you come home and everyone has a cold and people get into fights in the street about parking spaces because of the piles of snow… and it seems like it will never end.

So it makes a lot of sense that you and your partner would have some mood flares that culminate into something messy.

That’s not to say that a breakup that happens around this time of year is a mistake. Sometimes breakups need to happen. Plenty of relationships have gone on far longer than was healthy for the people involved because there wasn’t ever a tipping point or a rock bottom moment. Everyone knows at least one pair that was able to spend less and less time together, share less and less about their feelings and go along with the momentum for years, decades even. If you can’t handle the bump in the road that is mid-February, maybe you’re not meant to last.

So, be there for your friends who are going through some crap right now. Because breakups around VDay are just as painful, if not more, than ones at other times of the year. And if you’re going through one right now, be kind to yourself and seek out support and fun wherever you can.

COVID-19 has put a lot of events on hold, and this included Philly Pride 2020. We were all saddened that we couldn’t get together to

Photos from Level Up

Level Up shared some photos from their recent event.

The 45th anniversary of the Philadelphia Gay News is today and their anniversary issue is out!

New Hope Celebrates (NHC) will not be having the traditional Pride Parade and Pride Fair in May 2021 due to the ongoing COVID-19 pandemic and safety concerns surrounding the wellness of our community members, visitors, partners, and volunteers.