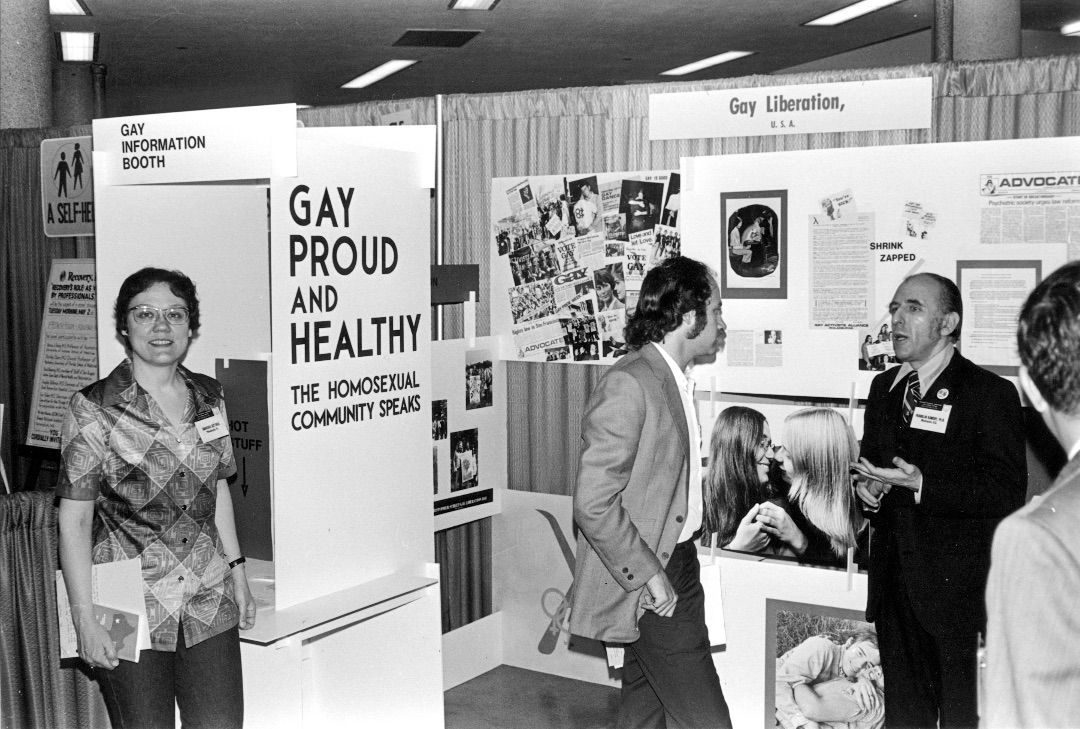 The John J. Wilcox, Jr. Archives at William Way LGBT Community Center has been awarded a $29,520 Save America’s Treasures grant from the Institute of Museum and Library Services (IMLS). The two-year grant will support the conservation treatment of five historically significant conference exhibition booths created by the late gay rights pioneer Barbara Gittings (1932-2007), which stand as a tribute to her phenomenally successful work in shaping the American social landscape.

Most important of these, the 1972 exhibition booth that Gittings and her partner Kay Tobin Lahusen designed for the APA annual conference worked in tandem with a panel co-hosted by Gittings (famously featuring the masked “Dr. H. Anonymous” who described the frustrations of his life as a closeted gay psychiatrist) to create a watershed moment in the gay rights movement. Challenged by this activism, the APA officially removed the classification of homosexuality as a “mental disorder” in the Diagnostic and Statistic Manual (DSM), the standard reference used by mental health professionals.

Gittings’ decades-long work with the American Library Association ushered in major change, too. Frustrated in her youth by the lack of information on homosexuality in libraries, she took leadership of the ALA’s GLBT Round Table in the early 1970s and tirelessly (and successfully) advocated for the need for gay-positive books in libraries.

Presented to the William Way LGBT Community Center through a series of gifts from Gittings and Lahusen beginning in 1991, the playful and creative display boards are American treasures that stand as a tribute to Gittings’ powerful legacy. Gittings and Lahusen kept the display boards in their Philadelphia home for many years, before donating them to the Wilcox Archives. With the passing of Lahusen at the age of 91 in May, the last of the couple’s materials were recently donated to the Archives by Lahusen’s estate.

“Gittings’ imaginative exhibition booths were created as ephemera,” says Wilcox Archives director, John Anderies. “They were to serve the immediate purposes of advocating for change as well as changing hearts and minds about what it meant to be gay or lesbian. Almost fifty years later, the historic importance of these remarkable artifacts and the need to preserve them is obvious. We are thrilled that IMLS has recognized their importance and is investing in the preservation of American LGBTQ history and culture.”

Some of Gittings’ display boards were exhibited in conjunction with the conference “Fighting Back: Defending the LGBT Mind and Body,” co-sponsored by William Way LGBT Community Center and the Historical Society of Pennsylvania in October 2015, and items have been shown in documentaries and loaned for use in exhibitions, including the acclaimed 2019 exhibition at the Newseum, “Rise Up: Stonewall and the LGBTQ Rights Movement.”

Ongoing deterioration of the exhibition booth material is inevitable with natural aging, and will continue to be exacerbated through handling for research, filming, and exhibitions. Treatment will help to mitigate the deterioration, and digital imaging will reduce the current stress of frequent handling.

The Conservation Center for Art and Historic Artifacts (Philadelphia, PA), one of the country’s leading paper-based conservation facilities, will perform the treatment of the display boards. Once the physical materials are treated, they will be digitally imaged and made available online through the Wilcox Archives’ digital collections website.

About Save America's Treasures program:

The Federal Save America’s Treasures program was established in 1998, and is carried out by the National Park Service in partnership with the Institute of Museum and Library Services, the National Endowment for the Arts, and the National Endowment for the Humanities. Since 1999, Save America’s Treasures has provided over $339 million to more than 1,300 projects to provide preservation and conservation work on nationally significant collections, artifacts, structures and sites.

About the Institute of Museum and Library Services:

The Institute of Museum and Library Services is the primary source of federal support for the nation’s libraries and museums. We advance, support, and empower America’s museums, libraries, and related organizations through grantmaking, research, and policy development. Our vision is a nation where museums and libraries work together to transform the lives of individuals and communities. To learn more, visit www.imls.gov and follow us on Facebook and Twitter.