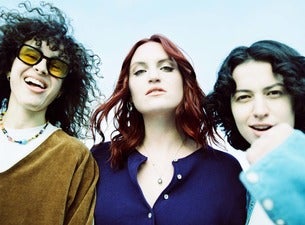 Formed in 2013 by vocalist Katie Gavin, guitarist/vocalist Naomi McPherson, and guitarist/vocalist Josette Maskin, who met while studying at the University of Southern California, MUNA quickly put together their debut EP, More Perfect. Released in mid-2014, the EP brought together their love of ’80s new wave and synth pop, R&B, and modern left-field pop. The trio spent the next year writing new material — signing to RCA in the U.S. and National Anthem in the U.K. in the process — before releasing their sophomore EP, Loudspeaker, in May 2016. By the end of the year, MUNA had recorded their debut album, with the resulting About U appearing in early 2017. Co-produced by the band and Dan Grech-Marguerat (Radiohead, Lana Del Rey), and featuring the single “I Know a Place,” it reached the Top Ten of Billboard’s Heatseekers Albums chart. A follow-up non-album single, “In My Way,” arrived in September of that year, just as they joined Harry Styles on tour. In 2019, the trio returned with a more heavy-hearted sophomore full-length, Saves the World, matching the Heatseekers chart success of its predecessor. After signing with Phoebe Bridgers’ Saddest Factory imprint in 2021, MUNA issued the single “Silk Chiffon,” which featured a guest appearance from Bridgers and appeared on the group’s self-titled fourth long-player in 2022.